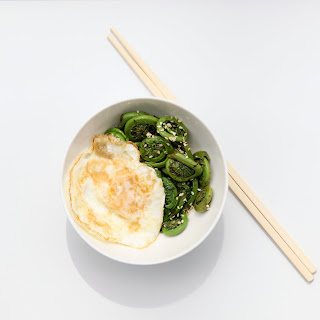 Well I saw these baby fiddlehead’s in my local market and I decided to try them.  I admit that up until about an hour ago I had NEVER tried a fiddlehead.  That said, I made sure to read up on the best way to cook them and pretty much every source I looked at claimed it was best to boil them like crazy until you are sure they are cooked.  Steaming apparently can leave behind a bitter taste.  So here is how I ate em-

(And yes, I liked them; though not in the same way I like,  say, chocolate or sweet potatoes or even spinach.  My guess is fiddleheads are a bit of an acquired taste.  So I intend to keep trying as they are very good for you!)

1. Boil your fiddleheads in a medium pot for 7-9 minutes.  (fry your egg just before they are done)
2. Drain, place in a clean bowl and toss with sesame oil and soy sauce.  Sprinkle with sesame seeds and serve with a fried egg.  Salt and pepper to taste.